All things Isuzu Trooper on Automobile. 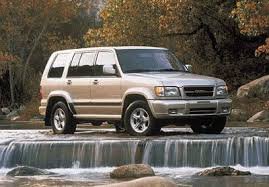 Admit it—unless you're an Isuzu enthusiast or here because you are actively looking for one, this is the first time you've thought about the Isuzu Trooper in quite some time. While Isuzu remains popular overseas for trucks both consumer and commercial, the legendary Japanese nameplate is found only on commercial trucks Stateside these days. That's a shame, as during Isuzu's heyday in the U.S. market, it established itself as a funky, experimental alternative to the somewhat staid and straightforward Japanese automaker image in the 1980s and 1990s.

One of Isuzu's most popular offerings was the square-edged Trooper, offered in the U.S. since 1984. The Trooper rode a wave of 4x4 popularity, positioning itself as a compact off-roader alternative to massive SUVs like the Chevrolet Suburban and the indomitable Toyota Land Cruiser. Initially, the Trooper featured a 1.9-liter four-cylinder and four-speed manual transmission; even for the era, the wheezy 86 horsepower output was barely adequate for the Trooper's 3,700-pound frame. Still, the Trooper impressed with its mountain goat, go-anywhere capability and cavernous interior dimensions.

Prior to the first-generation Trooper's replacement with the softer second-gen in 1991, all Troopers were unashamedly rugged and utilitarian in construction, more so than even the roughly equivalent Mitsubishi Montero. The second-generation Trooper sought to fix much of this farm-implement reputation by adding a host of creature comforts and upgraded powertrains to attract more suburban types rather than pioneering backwoods adventurers.

For the most part, it worked. While the Trooper retained the Dakar-ready 4x4 system and rugged construction, then new-ish tech like ABS and full-time four-wheel drive worked in tandem with leather and wood trim to shed any lingering truckish connotations. Molded running boards and contrasting color schemes were also popular in the later model years, blending well with the second-gen's softer and more rounded appearance. In the U.S., the second-gen Trooper came with either a 3.2-liter or 3.5-liter V-6, offering between 190 horsepower and 215 horsepower.

Eventually, middling popularity and Isuzu's burgeoning partnership with General Motors led to the Trooper's demise in 2002, replaced by the smaller and stranger Isuzu Axiom, and eventually the Ascender.

Of all Isuzu's creations that made it here, we probably miss the Trooper the most. Isuzu's ultra-boxy, mega-rugged Land Cruiser alternative was a 4x4 staple of the 1980s and a premium-ish suburban hauler of the 1990s that quickly faded from collective memory, but nevertheless has carved out a sizeable niche both among fans of the brand and the subset of enthusiasts who can't quite afford a Land Cruiser or the upkeep on a Land Rover. Couple this to the ongoing rise in popularity of both vintage SUVs and overlanding, and the Isuzu Trooper maintains a steadily growing fanbase who save and maintain examples of this semi-obscure Japanese SUV for years to come.

Buying an Isuzu Trooper isn't like hopping into the Land Cruiser scene. If you're after the boxy, no-nonsense appearance of the first-generation, good luck finding one that isn't completely beat to hell or with much semblance of originality. These trucks were rarely treated with kid gloves, and commonly carry odometers that have counted well beyond 100,000 miles, not to mention sketchy engine rebuilds, rusty bodywork, and homebrew paint.

So, maybe you started with a Trooper in project-car condition, expecting to resurrect this as a fun weekend project. Noble intention, but you'll likely be stymied by a lack of replacement parts, manufacturer support, and specialized tools. Long-term Trooper ownership won't cost you as much stress and money as, say, a Land Rover or an Alfa Romeo, but it's not going to be remotely as smooth sailing as a typical Toyota or Nissan.

Our advice? Be patient, and find the cleanest Trooper you can afford. Also, keep an eye out for special JDM-only Troopers and rare two-door variants; these are more likely to have been enthusiast-owned and still in good condition. If you can't find what you're looking for on Bring a Trailer or Craigslist and you're irreversibly sold on Trooper ownership, consider casting a wider net to overseas markets, where the Trooper was sold as the Isuzu Bighorn, Subaru Bighorn, Vauxhall Monterey, and the Holden Jackaroo, among other things.

If you are planning on holding out for something local, know what you're getting into before you dump a rusty, leaky heap on your driveway. Talk to local Trooper fans—if there are any in your area—and become an active participant in forums and Facebook groups. This network of enthusiasts is your best bet to get the project off the ground or keep your running Trooper going for many more years.

Even on epicenters of the rare and obscure like Bring a Trailer, older Troopers are far and few between. There are usually a handful of late-model second-gens available on the regular channels, but for the weirder variants, you're going to have to hunt.

Check out the super-rare 1989 Isuzu Trooper Bighorn Irmscher-R Turbodiesel that sold for a reasonable $22,500

A mostly unremarkable second-gen 1997 Trooper with manual transmission went for a reasonable $4,350 back in 2018

Be prepared for scarce parts and rotten project vehicles

You have questions about the Isuzu Trooper. Automobile has answers. Here are the answers to some of the most frequently asked Isuzu Trooper queries:

Is The Isuzu Trooper A Good Car?

Depends on what you intend to use it for. As a fun knock-around weekend 4x4 or rough-weather workhorse? Sure. No-fuss daily driver? Probably best to look elsewhere, as most Troopers are in dire need of mechanical and structural maintenance or repair.

Why Did They Stop Making The Isuzu Trooper?

Aside from lagging sales toward the end, Isuzu's partnership with GM begat the smaller Axiom and Ascender in the Trooper's place.

Who Makes The Isuzu Trooper?

This one's easy. Isuzu, of course!

Why Are Isuzu Troopers So Cheap?

Chalk the Trooper's bargain-basement prices up to a combination of parts scarcity, poor-condition examples, poor fuel economy, and a complete lack of manufacturer support in the U.S. ผลบอลล่าสุด