A fresh restoration, a four-speed gearbox, and a big V-8 engine massively enhance its appeal. 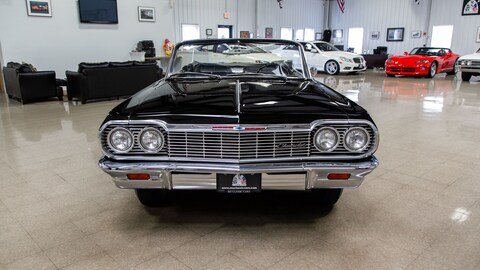 Here's the recipe for an eye-watering car auction result: Take an iconic classic car and select its ideal spec, give it a backstory sure to appeal to anyone with a nostalgic bone in their body, and then subject it to the sort of restoration that's perfectly correct yet much nicer than anything that would have rolled out off a production line at the time. Properly done, you end up with this 1964 Chevy Impala, a convertible unicorn rocking a big-block V-8 and a floor-shifted manual. It's likely to fetch a legendary sum.

Let's start with the engine, as that is where the legend begins. The numbers-matching, 409-cubic-inch V-8 sports dual-quad Carter AFB carburetors—good for a rated 425 horsepower and 425 lb-ft of torque. Of course, since this Impala presents as better than new, the engine makes more than that according to the seller. A recent dyno run in May showed 433 horses and 434 lb-ft, impressive numbers by any measure. And the 409's cultural and racing history gives it appeal beyond the specs. After all, this is an engine that inspired songs and powered Impalas to victory on ovals and road courses.

Then there's the backstory. It's not a one-owner car, but the second owner held onto it from 1965 until 2020—55 years! It's an American Graffiti kind of tale, too, wherein a high schooler in Joliet, Illinois, sees an Impala with the magical "409" fender badges. He asks the owner if it's real. She's pregnant and itching to sell the car because her husband's about to deploy to Vietnam. A deal is struck, and this improbable teen gets one of the hottest cars in the Midwest to drive to high school. And, even more improbably, that kid holds onto it for more than five decades, eventually restoring it to incredible condition.

A lot of things had to happen for this car to end up where it is today. Most of them were raced hard and put away wet, wrapped around poles, or altered beyond the point of no return. This Impala's teenaged owner was either a really good driver or showed remarkable restraint behind the wheel to keep this car straight, original, and likely stored under cover despite all the curveballs that life can throw at you in five-plus decades.

This car is listed for auction over at Hemmings, and while we don't have an estimated price to share, savvy collectors can do the math—this classic Chevy is ultimately destined to bring a pile. บาคาร่ามือถือ