“Ford v Ferrari”: How Much the Stars Drove, Where the Cars Came From, and More

Every enthusiast who has read A.J. Baime's nonfiction book about Carroll Shelby's and Ken Miles's mid-1960s sports-car racing effort, "Go Like Hell: Ford, Ferrari, and their Battle for Speed and Glory at Le Mans," has been anticipating its adaption to the big screen. Ford v Ferrari finally is here, directed by James Mangold and starring Christian Bale as Miles and Matt Damon as Shelby. 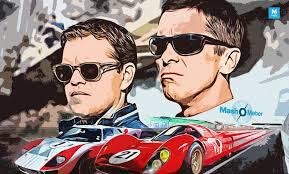 Ford v Ferrari stunt coordinator Robert Nagle held that same position for the breakout 2017 car chase/heist movie Baby Driver, and he has worked as a stunt driver on many movies and TV shows since 2002, including Talladega Nights: The Ballad of Ricky Bobby, Drive, Jack Reacher, Black Panther, and several Fast & Furious flicks. He also shares a 2015 Academy Award for Technical Achievement with Allen Padelford for their design of "The Biscuit," a self-propelled high-performance drivable camera and vehicle platform, which was used in scenes for the three races depicted in Ford v Ferrari, the 1966 24-hour races at Daytona and Le Mans, as well as an early '60s sports-car race at Willow Springs. We caught up with Nagle prior to the film's November 15 release.

Automobile Magazine: How is the stunt coordinator job different from a stunt driver's?

Robert Nagle: It's my job to A) hire those people and B) for this particular film, I had the latitude to design all of the action—meaning the race sequences—the way I wanted to, obviously with James Mangold's approval, and be able to put together some really cool action.

Do you get to drive any of the cars yourself?

In the early stages of the preparation when we're getting the cars dialed in and fit and sort everything out, I drove each and every car before I handed it over to my guys, so that I knew they were getting a car that was drivable, safe, and worked the way that we wanted it to work. Once we started filming, there's way too much going on for me to be in a car and not be able to see the whole picture of everything that's happening. Once that transitions, then I'm an observer from the outside kind of directing and choreographing the action.

How did you get these classics?

The GT40s and the Ferraris and the Porsches were all built for this film. We did have some real Ferraris, but they were for static shots for the Ferrari factory. They told me that somewhere in the neighborhood of $100-plus-million in Ferraris were sitting there. Ford was not involved. We had a few of [Superformance's] GT40s with real 427s in them, because they're licensed actually to reproduce that car and get down to each detail. It was really nice. It was a great car.

How much was computer-generated?

Very little. James Mangold mandated [that we] design this in a manner that uses a minimal amount of CG for the cars. There are some little pieces here and there, but what I feel is important and works is a happy medium between shooting the stuff organically and intermingling the CG. Maybe cars in the very, very deep background [at Le Mans] are CG because they're just dots at that point.

Any cars that stand out, and why?

They were a handful. They're much different than a purpose-built race car. We had some old Corvettes [in the Willows Spring race] and they were interesting to drive. They were kind of fun and kind of a taste of what it was like back then because they were actual early '60s Corvettes.

Did the Superformance GT40s feel much more modern?

No. The Superformance cars drive like 1960s race cars. You've got to really pay attention. It has its quirks and you just need to be aware of them.

How fast did you go in the testing?

I'll run the car ten-tenths to know what it's capable of. Not that we will run it that hard on the day when we're filming, but I need to know that it's capable of that so if I'm running it at 80 percent, I know the car is safe and there's a margin of error still allowed.

In many of your films as stunt driver, the chase scenes are fantastical and physics-defying, but this is a movie that faithfully reproduces actual races. How do you approach a fact-based film?

The biggest difference is, in something like the Fast & Furious films, a lot of the sequences have been predetermined and then we just have to figure out how to make that happen the best we can practically. In Ford v Ferrari, I'm given the latitude to design and develop the race sequences in a manner that made sense. But at the same time, you want to keep it exciting.

Every corner, every pass or crash, is shot from a number of different angles, and that's part of what you help determine as stunt coordinator, correct?

You have that absolutely right. Obviously, there are some historical points and what I did is I wrote a story for each race. It makes it easier to follow along what's happening and keep track of where we are in the race, who's where and what's where. It's a story to tell what the race is in and of itself. I did a similar narrative for the chase scenes [in Baby Driver] but not as detailed as the stories I wrote for Ford v Ferrari.

You should have a writing credit.

Who are your heroes in the stunt business?

I would have to say—and unfortunately, I never got to meet him—Hal Needham. He really pushed to make things really exciting and great, but safe.

Which movies have inspired you?

RN: I've always been a big fan of the chase scene in Ronin. That was very well done.

Did you reference Grand Prix or Le Mans with Steve McQueen?

Grand Prix, I thought that was very well done. Some great racing sequences.

How much did Christian Bale or Matt Damon really drive?

We took [Bale] out to Bob Bondurant and worked with him there and it was a twofold thing. Bob Bondurant and Ken Miles were very close friends and this also gave Christian the opportunity to sit with Bob and just talk to him about Ken Miles and the racing and get a true perspective of what it was like then. But I've got to tell you at the end of the day, Christian is hands-down the best actor I've ever trained to drive. He certainly has the aptitude and he pushes himself in increments that are safe, but he continually pushes himself and asks more of himself, but it's balanced with a nice dose of common sense. I think [Damon] did a fair amount of training for the Bourne films. And so he was quite handy with a car. He did a few stunty things in the cars and did a fantastic job.

Any standout scenes among the three race sequences?

No, I think it's a pretty well-rounded assortment of racing, with different sorts of action in each one. You've almost asked me which is my favorite child. I like all three races for different reasons. Le Mans was a bit of a gorilla to put together. We shot five different locations and then had to put those pieces of the puzzle together to make it make sense. We had a start-finish line at Agua Dulce airport (Los Angeles County) and used the airport as the front straightaway. We built the physical set piece for the pits there, and it looked amazing. We went to Road Atlanta and reproduced the Dunlop bridge. We found this country road that we ran the cars on at 180 mph for the Mulsanne Straight, and then there's a not very well known, not very well used road course in Savannah called the Grand Prix Track. We used that for the remainder of Le Mans to duplicate the esses and the various other corners like Tetre Rouge. It came together really beautifully. บ้านผลบอลsco