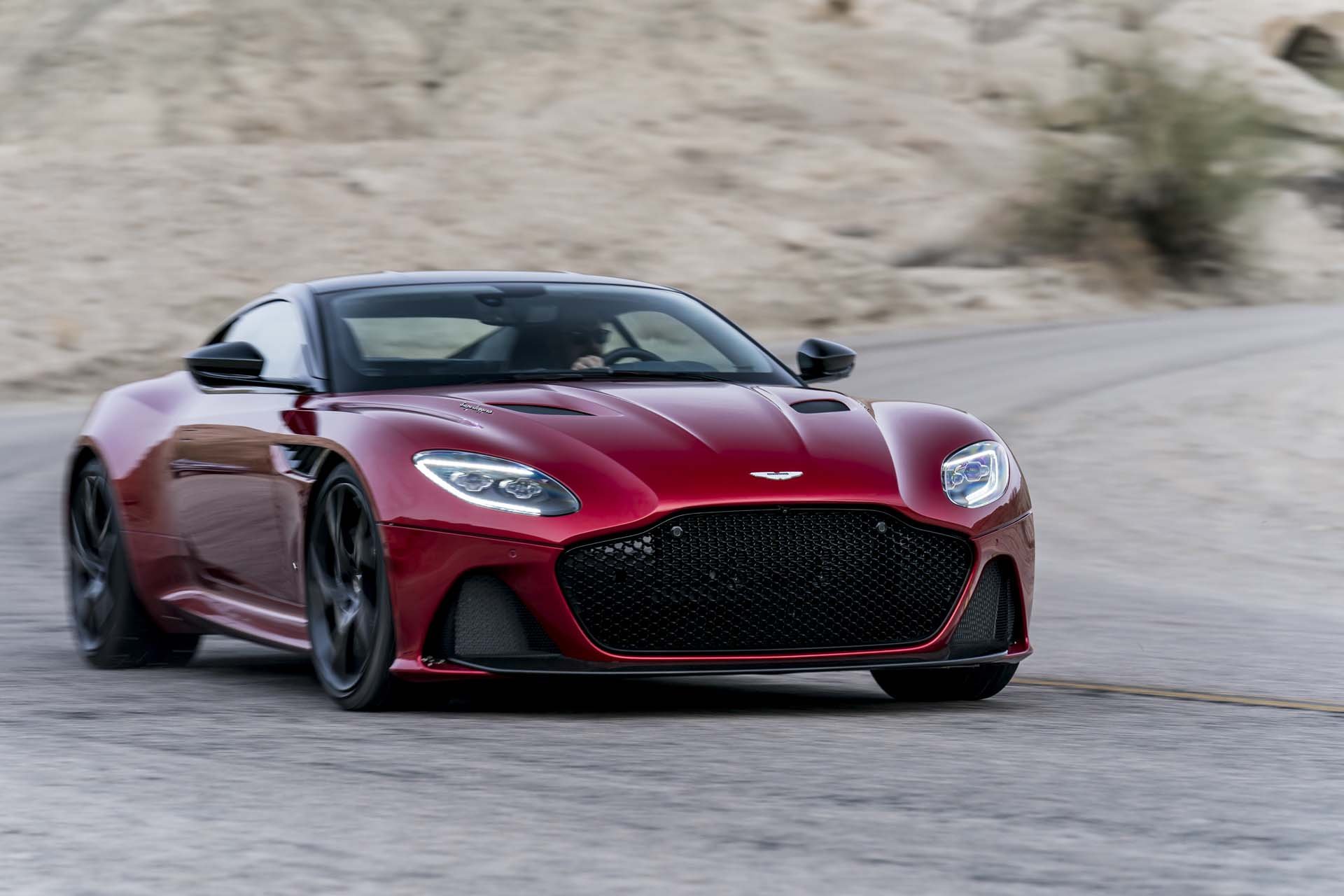 One of the most crucial things you learn after cycling through a veritable legion of different cars is that numbers—those cold, hard, irrefutable statistics pooled at the base of so many published automotive tests—don't tell the whole story. This is common sense, but no one prepares you for the inevitable perspective rot that sets in sometime between your first afternoon with a 220-horsepower hot hatch and the third time you pin the throttle in something with more 500 hp; it eats away at your internal goalposts to the point where your first impressions of statistics are now gangrenous and foul. "$50,000, 600 hp, and zero-to-sixty in 3.7," you read. "No dual-clutch? Might as well turn the whole lot of them into an artificial reef." No, not really, but this is where the 715-hp, 211-mph 2020 Aston Martin DBS Superleggera Volante comes in.

As tested, this metallic orange, color-shifting shard of crystalized speed will liberate $388,000 from your offshore accounts if you replicate its build. If we're comparing caviar to caviar, that's $200,000 dearer than a loaded BMW M8 Competition Convertible and $32,000 more than a base Rolls-Royce Dawn. Heck, for that kind of cash, you've got a stripper fixed-roof Ferrari 812 Superfast and a spare $53,000 in options to play with. Leave all of the extras on the shelf, and you're still going to pony up roughly $330,000 for the privilege of owning the 2020 Aston Martin DBS Superleggera Volante.

For this kind of financial sucker punch, more than a few of you are sneering at the 715-hp figure. After all, the aforementioned Ferrari 812 manages 789 hp without the help of forced induction, which is itself a smidge down from the blue-collar Dodge Challenger SRT Hellcat Redeye with its concrete-crackin' 797 hp. Keep reading, and it becomes statistically more upsetting; in place of the supercar-standard dual-clutch transmission, the 2020 Aston Martin DBS Superleggera Volante makes use of a traditional ZF-sourced eight-speed automatic, returning a zero-to-60-mph pull of a feet-dragging 3.5 seconds. Can you imagine admitting that middling time down at the athletic club? Careful you don't mention that in front of Alistair—I heard he's been mighty proud of his new 911 Turbo S and its 2.6-second sprint.

Enough snark. Untethered by comparisons, spec charts, instrumented testing, and Instagram comments, 715 hp is borderline unfathomable in a road-legal car, let alone something that was designed as a semi-cushy riviera mile-muncher. Significantly, aside from the monumental power, the DBS' 5.2-liter twin-turbo V-12 chugs out 664 lb-ft of torque. If you absolutely have to keep score, that's more twist than anything with an internal combustion engine on the present production roster at Ferrari, McLaren, Porsche, and Lamborghini.

There's so much torque, in fact, the transmission restricts the output in first through third gears, only giving up the full goods once you shift into fourth. From a dig, there's a mad scramble from the rear as the Pirelli P Zeros hop, skip, and slide trying to hold on. Once it hooks—somewhere around the 50-mph mark—you gather speed like a hiker chucked off a cliff by Bigfoot. There's no discernable drop-off in power, even as things get a bit blurry, breathless, and lose-your-license stupid; drinking deep from that twin-turbo V-12 gives off the sneaking suspicion the invisible hand of acceleration's been hitting the trenbolone rather aggressively. Not since the Porsche GT2 RS  and the McLaren 720S have I experienced a car that feels so capable of a million-miles-per-hour—and those aforementioned Automobile All-Stars did so with a piddling torque figure well shy of the 600 lb-ft mark. If one of your qualifiers for being a true "GT" car is the capability to effortlessly shuttle occupants at high-speeds for long distances, the 2020 Aston Martin DBS Superleggera Volante passes with flying colors.

Looks To Die (Another Day) For

That's to say nothing of the visual and aural drama that accompany this railgun launch. With or without the soft-top, the DBS Superleggera is arguably the most stylistically evocative Aston Martin we've seen in quite some time. If you weren't a fan of the catfish-style grille Aston cultivated since the 1950s, you're not going to like the DBS' maw, but it synergizes well with the DBS' unavoidably hulking footprint. Those flowing, windswept lines are devastatingly beautiful; it looks as if, were you to spatter a parked DBS' clamshell hood with water, the droplets would streak over the bodywork and dissipate off of the rear lip within seconds.

There isn't the same level of aesthetic theater inside, but mostly divine materials and thoroughly modern design permeate the cabin. Stitching and leather is top-notch, as is the infotainment infrastructure sourced from technical partner Mercedes-Benz. Some fasteners and mounting points are plastic, but you have to hunt for anything not leather-wrapped or carbon-clad. For the intended purpose of long-distance cruising or coddling on your daily commute, it feels mostly worthy of the $330,000 payout.

I'm not the only one who digs the DBS. Wherever you drive, cruise, park, fill up, or idle, phones come out, kids cheer, and takes are tripled. Parking the Volante in front of a nearby house where a car-hungry kid lives drew surrounding neighbors out like free ice cream, requesting photos, info, and an earful of that 12-cylinder music.

The Sound And The Fury

What a sound it is, too. V-12s are understandably endangered these days, and two out of the six existing V-12 automakers don't even put their's on performance duty. Mercedes' AMG-ified V-12s are gruff torque monsters with an industrial-age soundtrack to match, so it falls to Ferrari, Lamborghini, and Aston to harmonize. The DBS' 12 isn't as sonorous as the vaguely Duratec-based Aston V-12s from the past two decades, but it's smoother and less gargle-prone than those free-breathing monsters.

However, just like those prior Aston V-12s, the DBS sounds objectively phenomenal, but somehow it manages to be somewhat clinical—almost like a V-8 tuned to sound like a V-12. Distant highway rips in a big Ferrari or Lambo are easily identifiable, but the DBS' 5.2-liter is almost characterless in tonality, similar to the crackly noise emitted by Jaguar's ubiquitous 5.0-liter supercharged V-8.

Escape the looky-loos and charge into the hills, and the story gets even sweeter. The 2020 Aston Martin DBS Superleggera Volante is a big car, so leave the tighter, narrower stuff to the Boxsters and BMW M2s, and head for an area with wide sweepers. Sawzalling the roof off the DBS coupe added an additional 220 pounds to the already hefty car, now weighing in at a total of 4,107 pounds. All of that extra mass went into both the folding canvas roof and the requisite structural bracing to compensate for the aire libre configuration. To offset this added bulk, Aston rejiggered the rear suspension by increasing the spring rates by 13 percent, alongside a 30-percent higher compression-rate and a 25-percent greater rebound rate.

Without having driven the coupe back-to-back with the drop-top, I can't say how big of a difference it makes, but I'd reckon with the Volante-specific changes, differences are minor. Charging over curvier tarmac, the excellent multilink suspension setup, wide track, and 50:50 weight distribution belies the bulk, returning composed handling that suits the car's multi-purpose, long-legged character. Compared to the sharper-edged Vantage, the DBS eschews the smaller car's Track suspension setting, instead offering three stiffness tiers ranging between GT, Sport, and Sport Plus. Most seat time was spent toggled between comfort-oriented GT and edgier sport, leaving Sport Plus only for truly pristine pavement.

Dynamically, there are only two gripes: The steering isn't as sharp or tactile as I'd hoped, and when paired with the DBS' particularly touchy throttle, the ZF-sourced eight-speed transmission was either overeager or reluctant to downshift, depending on the toggled drive mode. However, during regular day-to-day driving, neither the steering, throttle, nor transmission intruded enough to warrant further complaint.

Surprise, surprise—sublime, semi-relaxed grand touring is the 2020 Aston Martin DBS Superleggera Volante's party piece. Like the big Astons that came before it, the DBS gobbles up hundreds of miles at an alarming pace, with nary a care given to broken pavement nor speed limits. Meanwhile, paralyzing beauty and roaring vocal cords alone are nearly worth the cost of entry. The 2020 Aston Martin DBS Superleggera Volante is not a numbers car; call it a sensation car, as corny as that may be.

Next time the members down at the polo grounds get high-and-mighty with their Bentleys and Maybachs, take 'em out for lunch in the DBS—just make sure you take the long, straight-and-then-sweepy way.

Expensive—and worth it เซ็กซี่บาคาร่า