This Flamenco Black Pearl Civic Si could be yours for less than the price of a new 2020 Si. 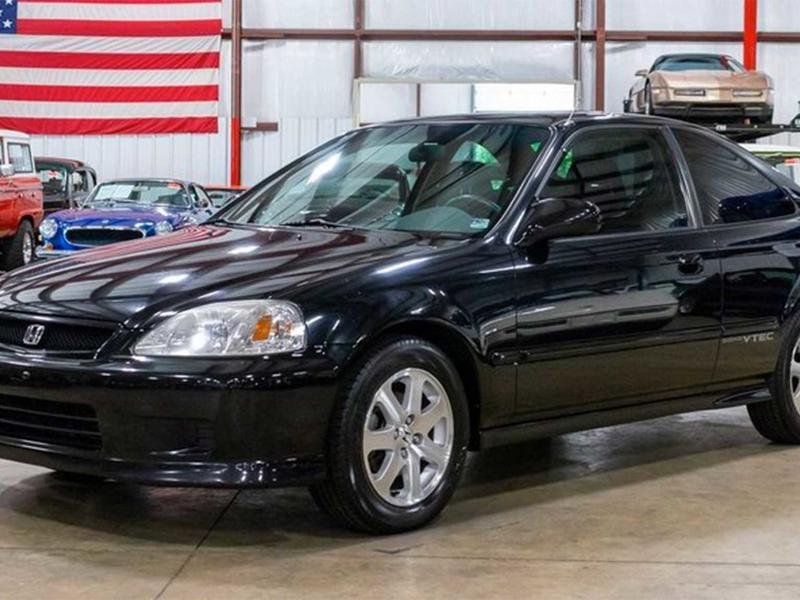 We've been in a nostalgic haze over the 1999-2000 Honda Civic Si coupe for a while. The two-door Civic's zingy 1.6-liter four-cylinder engine, which crested the magic 100-hp-per-liter benchmark thanks to Honda's VTEC variable valve timing system and its ear-splitting 8,000-rpm redline, steals the show. So, too, does the economy car's simple interior and manual transmission. We're not the only ones pining for these emerging classics, however, as evidenced by the recent over-$50,000 sale price of a clean, low-mile example on Bring a Trailer. Is that the new pricing benchmark? Perhaps not, and there is hope for those in the hunt for a similar EM1-generation Civic Si at GR Auto Gallery in Grand Rapids, Michigan.

Mitten state locals surely know of GR Auto Gallery, a consignment outfit that sells cool and interesting cars often plucked from around Michigan. The 2000 Honda Civic Si it has listed for sale was sold new in Grand Rapids and tooled around the area its entire life. It wears less-common Flamenco Black Pearl paint, is unmodified, and has traveled a little more than 80,000 miles over the course of two decades. Now, that's quite a few more miles than the 5,400 odometer clicks displayed by the Electron Blue example sold on Bring a Trailer, but remember, that one had a few minor modifications. This Si is untouched and ridiculously clean.

It would appear as though the original owner never really drove the spicy Honda coupe most months out of the year. (In Michigan, winter occupies a lopsided share of the calendar among the state's four seasons—and is typified by dumping snowfalls, lots of road salt, and springtime pavement cratering.) We can't see a flake of worrying rust anywhere, aside from some expected surface corrosion on the exhaust piping. Honda fans can eat their hearts out on this Si. Specifically, on its unbelievably solid, un-oxidized rear fender arches—the site of typical "Honda rot" on this era of H cars.

The Si's interior and underhood areas are similarly worthy of eating off of. Even the original factory radio remains nestled in the Civic's single-DIN slot in the dashboard. Interested buyers can also look forward to combing through the car's maintenance records, as well as its original window sticker and owner's manual. So, what's the ask for all this original Honda sweetness? An easy to swallow $22,900—less than half of what that other Si sold for on Bring a Trailer. No bidding is required, either, and we should point out that the asking price is a few grand less than that of a brand-new 2020 Honda Civic Si. If you're keen on snapping up one of these increasingly rare, unmolested older Civic Si coupes, then you may not find another like this one for similar money in a long, long time. แทงบอลขั้นต่ำ