Can the fastest Mini ever keep up with the best hatchback in history? 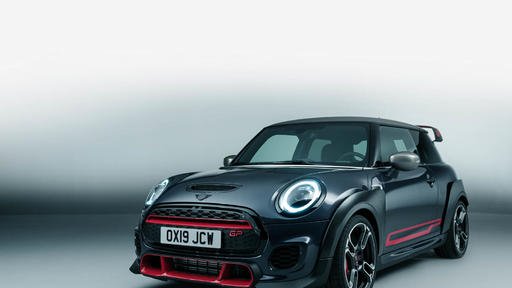 If you see a first-generation Mini Cooper (the reboot, not the original Austin Mini) driving the streets, your first thought is likely to be something along the lines of, "Wow, Minis really used to be mini!" While that's much less true today, the Mini is still among the smallest of hatchbacks you can buy, and small often equates to sporty when the right equipment is piled on. Now Mini has released its fastest vehicle ever, the new John Cooper Works GP, piled high with performance upgrades. Just 3,000 will be built.

Under the hood, you'll find a turbocharged four-cylinder engine rated at 301 horsepower and 331 lb-ft of torque. Those are very solid figures for a hatchback of any kind, let alone a smallish one; compared to the Honda Civic Type R, the new Mini JCW GP is down five horses, but up 36 lb-ft—and the new GP makes 74 horsepower more than the old GP. Paired with the JCW GP's eight-speed automatic transmission with mechanical limited-slip differential, zero to 62 mph takes just 5.2 seconds. Top speed? A brisk 164 mph—and no, that's not electronically limited; it's just the top speed the car can reach.

Mini gets the extra power out of the 2.0-liter turbo four by dropping the compression ratio from 10.2:1 to 9.5:1 and cranking up the boost, courtesy of a new turbocharger integrated directly into the exhaust manifold. A new intake tract also improves airflow for greater power and responsiveness. Fuel is delivered by a direct-injection system, now upgraded with centrally located injectors with multiple holes for higher fuel flow. To preserve all of this high-power tech, Mini also upgrades the JCW GP's oil sump, increasing the volume and improving the geometry to ensure oil pressure at higher g loads. Thanks to all of this engineering, the Mini JCW GP makes peak torque from 1,750 rpm through 4,500 rpm, and peak power from 5,000 to 6,250 rpm.

Other unique equipment for the JCW GP compared to normal Minis includes a special exhaust, which improves not just flow responsiveness, but also sound. Likewise, the engine's cooling circuit has been upgraded with the addition of two extra external radiators, a GP-specific expansion tank, and an upgraded fan to help keep engine temperature under control even during extended hard use.

An automatic transmission, though? Yes, the eight-speed Steptronic transmission in the new Mini John Cooper Works GP is a classic automatic, but it's been tuned for the GP, and includes an integrated mechanical limited-slip differential to better apply the JCW GP's 301 horsepower to both of the front wheels, with a maximum lock-up of 31 percent—the better to limit torque steer. For those who just can't resist selecting their own gears, steering-wheel-mounted shift paddles are standard. Unique to the GP, the shift logic in the eight-speed auto promises sharper downshifts during braking, and the ability to skip down multiple gears for sudden acceleration.

Handling is just as important as power, traction, and acceleration, of course, so Mini upgraded the JCW GP's suspension with a load of unique tweaks, too. The basic architecture is the same front strut, rear multilink arrangement as other Minis, but here, the track width has been increased, the ride height lowered by 10 mm compared to the standard Mini John Cooper Works, and stiffer springs and dampers have been tuned to match. There's even a more aggressive alignment from the factory, with more negative camber for better grip during cornering.

Braking upgrades include a four-piston aluminum fixed-caliper system on the front axle, grabbing discs that measure 14.2 inches in diameter and 1.2 inches thick. The calipers are painted Chili Red and wear the John Cooper Works logo. Those brakes peek from behind 18x8-inch wheels weighing in at less than 20 pounds each. At least on the European model pictured here, Hankook Ventus S1 evo Z rubber is fitted, in size 225/35.

There's also a host of unique aerodynamic and cosmetic touches laid on the John Cooper Works GP. A large roof spoiler is one of the most notable additions, but the redesigned front bumper area and front spoiler, the extra large air intakes, and the carbon-fiber-reinforced plastic wheel flares all play a role in improving the Mini JCW GP's aerodynamic performance. The wheel-arch flares are made of a sandwich structure that applies a shell of carbon-fiber-reinforced plastic (CFRP) to a thermoplastic substrate; the CFRP is made from material recycled during the production of the i3 and i8 made by Mini's parent company BMW. To highlight the flares themselves as well as the car's exclusivity, each set bears a serial number from the 3000-unit run.

On the cosmetic side, the Mini JCW GP gets its roof and side mirror caps finished in Melting Silver Metallic paint, Chili Red-painted accents, and GP logos all over the car in Rosso Red matte metallic. The cabin also gets some GP-specific cues 3D-printed from metal, including a metal plate on the passenger side with the serial number, the steering-wheel trim, and the shift paddles. A Chili Red aluminum structural brace is mounted behind the seats—as in previous GP models, there are no rear accommodations for passengers.

As for the Mini John Cooper Works GP's tech equipment, a standard 6.5-inch screen mounted in the central instrument panel displays navigation and other infotainment functions, while a 5.0-inch color display mounted on the steering column shows speed and, with GP Mode activated, other performance-related information.

The 2021 Mini John Cooper Works GP arrives at dealers in the middle of next year, with pricing to start from $45,750. For those keeping score, yes, that's about $10,000 higher than the Honda Civic Type R's base price. Will the GP justify the premium? We'll let you know as soon as we get a chance to drive it.  ผลบอลย้อนหลัง